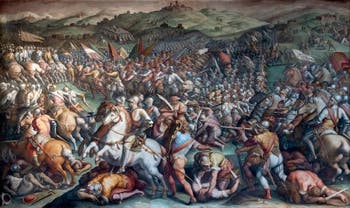 This battle saw the scathing defeat of the Sienese commanded by a rebel Florentine nobleman, Piero Strozzi, on August 2, 1554.

Strozzi was the head of an army composed of French, Grisons and Florentine political refugees.

Shortly before noon, the Imperial Florentine cavalry attacked the French cavalry, whose rout can be seen in the left part of the fresco.

The French infantry then attempted a counter-attack which was valiantly repelled by that of the Florentines who crushed the French and Grisons, as seen in the ballet of flags at the top of the painting.

The Sienese casualties were terrible for the French and Grisons: 4,000 dead and as many injured.

The Mystery of the Battle of Anghiari by Leonardo da Vinci: “Cerca Trova”, “Who Seeks Find”

Of the 130 enemy banners, the troops of Duke Cosimo I of Medici took over 103 of them, who were then exposed for several days in the Basilica of San Lorenzo in Florence. 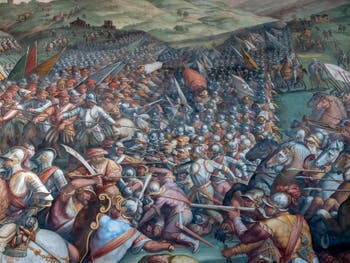 Mystery Anghiari Leonardo da VinciThe fresco of this battle of Marciano also became famous because of the inscription that can be seen on one of the enemy banners, “Cerca Trova”, “Who Seeks Find”.

Many saw a hidden message from Giorgio Vasari indicating that behind the wall of his fresco was a second wall with the famous Battle of Anghiari painted by Leonardo da Vinci.

A hypothesis that acquired great fame because of the author Dan Brown and his book “Inferno”.

Dan Brown staged his hero Robert Langdon in the Hall of the Five Hundred of Palazzo Vecchio to decode Vasari’s secret message.

In 2012, the mayor of Florence, Matteo Renzi, even allowed a team of researchers to drill small holes through Vasari’s fresco in an attempt to find behind it the remains of Leonardo da Vinci’s. 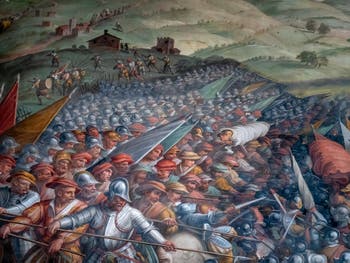 In October 2020, the hypothesis of a battle of Anghiari hidden under the fresco of Vasari was definitely ruled out by expert Cecilia Frosinini, director of the Painting Restoration Department of the Opificio delle Pietre Dure in Florence.

After years of studies and research carried out collectively with experts and academics, she published a book that definitively concludes the debate: “The Great Hall of Palazzo Vecchio and the Battle of Anghiari by Leonardo da Vinci. From architectural configuration to decorative device” Olschki editions, 2019 — 596 pages.

The conclusion of Cecilia Frosinini and the group of experts with whom she collaborated is that Leonardo da Vinci never painted, even partially, the Battle of Anghiari on the wall of the Hall of the Five Hundred.

Only preparatory sketches, cartons, would have been made by de Vinci.

How to explain the presence of this “Cerca Trova” “Who Seeks Find” on the flag of the Florentine exiles? 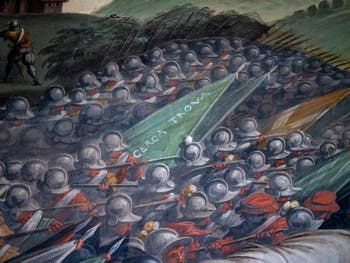 Mystery Anghiari Leonardo da VinciFor this, we must recall the verses of one of Florence’s most famous exiles, Dante Alighieri, who wrote in the “Purgatory” of the Divine Comedy (I 70-72):

“He seeks the freedom that is so dear, as knows who, for her, refused life.”

The refusal of life is an allusion by Dante to the suicide of Caton, who preferred the immortality of a free soul. For Dante, political freedom is spiritual and ethical freedom.

If tyranny deprives us of the exercise of free will, of our soul, death must be preferred to a sworn existence.

Thus, the warrior who lets himself be killed in a crowd of enemies rather than surrender to mercy is violence suffered by the righteous and wise man.

It is for this reason that the king of France who supported the Florentine rebels had offered them about twenty green banners carrying this verse of Dante: “Libertà va cercando, ch’è sì cara”. 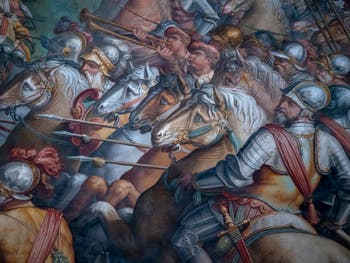 Battle of MarcianoThe “Cerca trova” seen on the green banner of the Florentine rebels in Vasari’s fresco therefore corresponds well to Dante’s verses.

On the other hand, Vasari diverted its meaning sarcastically to the benefit of the glory of Duke Cosimo I of Medici.

The word freedom no longer appears, and for a good reason, since for Vasari it can only be on the side of Florence and in fact his “Cerca trova” can be summed up to “who seeks me finds me! or developed to “Who seeks false freedom while fighting Florence finds punishment!”

Vasari’s frescoes in the Hall of Five Cents of Palazzo Vecchio had no other purpose but to affirm the greatness of Duke Cosimo I, and for this reason, the inscription “Cerca Trova” can only be seen in this context as an element of political propaganda, without hidden mystery.